Parkinson’s disease (PD) and amyotrophic lateral sclerosis (ALS) are the second and third most common human adult-onset neurodegenerative diseases, respectively, after Alzheimer’s disease. They are characterized by prominent age-related neurodegeneration in selectively vulnerable neural systems. Some forms of PD and ALS are inherited, and genes causing these diseases have been identified. Morphological, biochemical, and genetic, as well as cell and animal model studies reveal that mitochondria could have a role in this neurodegeneration. The functions and properties of mitochondria might render subsets of selectively vulnerable neurons intrinsically susceptible to cellular aging and stress and overlying genetic variations. In PD, mutations in putative mitochondrial proteins have been identified and mitochondrial DNA mutations have been found in neurons in the substantia nigra. In ALS, changes occur in mitochondrial respiratory chain enzymes and mitochondrial cell death proteins.[1]

Beyond the genetic factors to inherit these diseases, many who have had traumatic brain injury are at an increased risk of developing one of these debilitating diseases. Athletes who are involved in boxing, football and hockey, Veterans, and others are especially susceptible:

Over a lifetime, we believe that Parkinson’s and several other neurodegenerative diseases are caused by genetics AND some kind of trigger in a person’s life with age. For example, inflammation in brain tissue caused by either genetic susceptibility or triggered by accumulating cellular proteins and external events, such as severe concussions, will leave the brain more open to injury. [2]

ALS attacks the nerve cells located in the brain and spinal cord (motor neurons). As the disease progresses, the patient loses the ability to control muscle movement as the motor neurons die. ALS is a terminal disease currently with no cure. Metabolic treatments like the Deanna Protocol have been reported by patients to improve quality of life for those with ALS. The ALS.org shared this amazing infographic to help increase awareness and knowledge about ALS – See:  http://web.alsa.org/site/PageNavigator/Chal15_what_is_ALS.html?_ga=1.11083444.1475505218.1462481428

This is a progressive and neurodegenerative disease whose cause and cure is currently unknown. Nerve cells in the brain malfunction and die.

Motor symptoms result from the loss of pigmented neurons or cells in the substantia nigra of the brain. These cells produce dopamine, a chemical responsible for smooth purposeful movement. A decrease in dopamine does not account for all symptoms experienced in PD. Research is ongoing to better understand the pathology of Parkinson’s. [3]

Despite a common misconception, Alzheimer’s is not a normal part of aging. The damage and death of nerve cells causes the symptoms most commonly associated with this disease:

The brain has 100 billion nerve cells (neurons). Each nerve cell connects with many others to form communication networks. Groups of nerve cells have special jobs. Some are involved in thinking, learning and remembering. Others help us see, hear and smell.

To do their work, brain cells operate like tiny factories. They receive supplies, generate energy, construct equipment and get rid of waste. Cells also process and store information and communicate with other cells. Keeping everything running requires coordination as well as large amounts of fuel and oxygen.

Scientists believe Alzheimer’s disease prevents parts of a cell’s factory from running well. They are not sure where the trouble starts. But just like a real factory, backups and breakdowns in one system cause problems in other areas. As damage spreads, cells lose their ability to do their jobs and, eventually die, causing irreversible changes in the brain.[4]

A recent study by researchers from Indiana University, concludes that:

An enzyme that protects the brain against oxidative stress may also protect against the formation of protein clumps – a hallmark of Alzheimer’s, Parkinson’s, and other neurodegenerative diseases. An accumulation of protein clumps is known to occur in a number of neurodegenerative diseases, including Alzheimer’s disease, Parkinson’s disease, and amyotrophic lateral sclerosis (ALS) – also known as Lou Gehrig’s disease. In Alzheimer’s disease, for example, studies have shown that patients often experience a build-up of a protein called tau, which clumps together in nerve cells to form “tangles.” This process – known as proteinopathy – occurs with different proteins in a variety of brain diseases and is believed to play a role in their progression.[5]

Every day someone we know or love is struggling with the challenges of a neurodegenerative disease, and many are dying. It is important to understand how these diseases are connected so we can find a cure for them all.

The Deanna Protocol® Metabolic Plan for Other Neurodegenerative Conditions

Winning the Fight ® (WFND) plans to begin researching the DP™ Plan and its effectiveness in conditions other than ALS. Why? Other neurodegenerative conditions (such as stroke, traumatic brain injury, concussion, Alzheimer ’s Disease, Parkinson’s Disease, Multiple Sclerosis, and more) may have different causes, but they all share one common denominator: Glutamate. Regardless of the disease/condition, all nerve cells release excess glutamate into the extracellular space when they die and this glutamate will kill neighboring cells. Therefore, nerve cell death probably spreads throughout the nervous system the same way in all of these conditions. Since the DP™ Plan manages the spread of neuron death, it could likely help manage all neurodegenerative conditions, regardless of their initial cause.

​For more information on the DP™ visit:  https://www.simplesanutrition.com/deanna-protocol/ 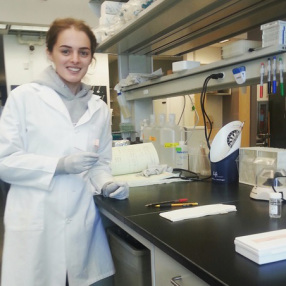 My name is Sarah Martin. I am a junior neuroscience major at Drake University in Des Moines, Iowa. When I was 14 years old and a sophomore at the Illinois Mathematics
and Science Academy, my principal and close friend, Dr. Eric McLaren, was diagnosed with amyotrophic lateral sclerosis (ALS). ALS is a fatal neurodegenerative disease that
affects nerve cells in the brain and spinal cord. Since his diagnosis, I have been
passionate about fighting ALS. I conduct research at universities in the Midwest, attend support groups in the Chicagoland area to meet pALS and their families, blog about my journey to a cure for the disease, speak at schools about ALS and so much more! Dr.
McLaren passed away from ALS in June of 2014, but I have made it my life’s mission to
put an end to this disease. My future plans include earning a doctorate degree,
becoming an ALS researcher, and helping develop an effective treatment for ALS.
The most important part of my ALS work is the people with ALS (pALS). During my time
at ALS support groups, I have learned that because the disease is characterized by
muscle weakness and atrophy, there are a handful of challenges pALS may face in
regards to eating. Difficulties with upper body coordination may make it difficult to
prepare meals. Weakness of tongue and facial muscles may not only make it tough to
safely chew and swallow food, but can also prolong mealtimes. In addition, aspiration of
solids or liquids into the lungs can result in aspiration pneumonia. pALS may experience
a loss of appetite and fatigue which can make eating a difficult task. As ALS progresses
in a person, the amount of calories consumed typically decreases.
Proper nutrition is vital. The human body requires various nutrients to function. Due to
decreased food intake in ALS, it can be difficult to maintain nutritional needs, but there
are nutritionists, dietitians and other experts working to improve the nutritional status of
pALS. In order to maintain the nutritional needs of pALS, tips for safer chewing and
swallowing techniques can be utilized, such as taking smaller bites, eating slowly and
sitting in an upright position while eating. Healthcare professionals can also assist in
making decisions regarding alternate feeding options, such as a feeding tube.
Maintaining the nutritional needs of pALS is important as it can help slow down the
muscle breakdown process and prevent a decrease in weight loss (nutrition-related). It
can also help keep the immune system strong and improve the quality of life for those
with ALS!

Sarah’s Mission
A woman on a mission to end ALS/MND/Lou Gehrig’s disease
Follow my journey at www.sarahmartinals.com
missionsarahs@gmail.com

The ingredients in Simplesa AAKG+ Core Powder have been shown to exhibit benefits in several neurodegenerative diseases, including Parkinson’s disease. This paper details how the combination of Arginine Alpha-Ketoglutarate, GABA, Ubiquinol and Niacin found in Simplesa AAKG+ Core Powder, along with Glutathione, may enhance mitochondrial function and be effective stand alone and co-therapies in the management of Parkinson’s disease.